16 Comments
Scared of dogs? Books to help your child overcome their fear.

Man’s best friend … or not. 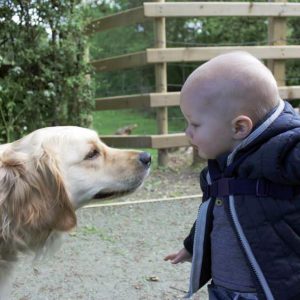 There are lots of books for children featuring dogs. More often that not they’re presented as a child’s best friend. But what if your child doesn’t think they are his best friend? What if he’s scared of dogs?

Let’s face it, to a small child a dog is a pretty scary animal with big teeth. Even a friendly dog can be bouncy and knock the child over, can’t be stopped from giving unwanted face-licks and has the breath of a hound straight from hell.

Whilst walking in the park my two-year old grandson happened to pick up a stick and started carrying it. Unfortunately, a nearby dog thought it was playtime. It ran over and wrenched it off him. Since this incident he screams if a dog comes anywhere near. And I’m talking ear-splitting, I’m-in-danger-of-being-eaten-alive screams. A reaction way out of proportion to the behaviour of the dog. We needed a plan.

Books for children who are scared of dogs.

My first job was to find some books that might help. We already books like Spot and Hairy Maclary and he was quite happy with these ‘book dogs’. I needed more. In the end, I ordered two books. 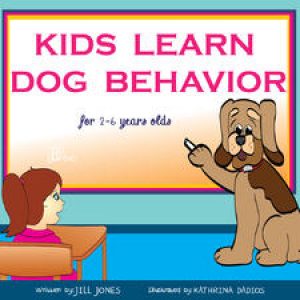 First impressions: the printers had trimmed it slightly crooked and the paper wasn’t the greatest quality. I’m not sure how many reads through with children it will stand. However, the illustrations are bright and colourful and the text is in rhyme … which I always like.

It explains how to tell if a dog was frightened, angry or wanting to play but … there was a picture of a dog baring it’s teeth with the text that ended, “Give me my bone back to chew… Or you better watch out – I will bite you,” … which wasn’t the message I wanted to send.

I haven’t read it to my grandson yet.

Next to arrive was “May I Pet your Dog?” by Stephanie Calmenson. 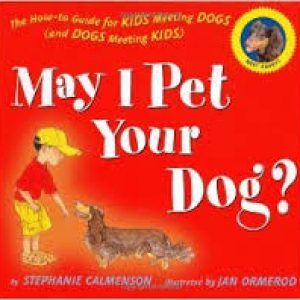 In contrast to the first book, I was surprised and impressed it was a hardback. The illustrations are sweet and the text is gentle and fun to read. 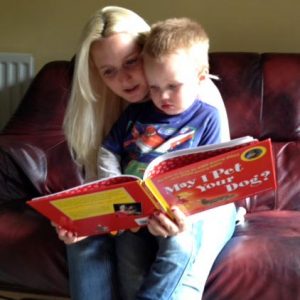 This book isn’t aimed specifically at children scared of dogs but has lots of dog-meeting etiquette and general good advice on how to approach a dog, which would also be good if your child was too eager to cuddle animals they were unfamiliar with.

My grandson was very interested in the book and, even after several reads with me, he took it to his Mum to read yet again.

We practiced asking, ‘May I Pet your Dog’ and also holding our hand with the fingers pointing down so a dog could come and sniff. We also practiced standing very still and not looking at a dog if we were afraid. We had great fun with me pretending to be a dog although I thought it was telling that, when he played the part of the dog, he crawled around growling and wouldn’t be a ‘friendly’ dog.

This book was a winner.

This is about a boy who says he is very brave. He proclaims he isn’t afraid of anything, not spiders, not snakes and not thunderstorms. He’s not afraid of dogs either, he just doesn’t like them. 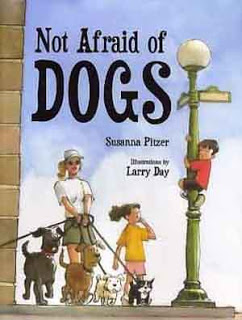 It is aimed at slightly older children than my grandson but sounds a good read and I may order this if he needs more encouragement.

I think we need plenty of practice meeting pretend dogs before we attempt it on the real thing and I’m looking for someone with a really, really laid-back pet for the first meeting.

Do you know of any books I missed? Or any suggestions on helping children overcome their fear of dogs? Let me know in the comments.

Will let you know how we get on.